Background
Cycling home from work at 22.00hrs in October. Some street lighting but it is dark.  I am wearing a HiViz/yellow jacket, have a refective band around my helmet, reflective strips are stuck to various points on my bike, my panniers have big reflective patches and I have two front and two rear flashing lights. I have been told I look like a Christmas tree but personally I believe I am much more jarring than that!

Situation
Passing a road side pub. Several men stood outside smoking and drinking. Abuse and profanities shouted towards me. None returned.

Analysis
I stand out. They are in a group and have likely imbibed a considerable amount of alcohol (and so feel brave on both counts). They are prats.

Reflection
I am noticed by drunken men when I am cycling at night. I feel a little safer.
1 comment:

Cycling On The Rails

I was in Oxford for a couple of days earlier this week to teach on a course. Deciding to go by train rather than car and knowing the hassle of getting into Manchester centre in the morning and Oxford centre in the evening and also having stayed at the hotel previously, I thought it would be good to cycle to and from the train stations and between the course centre and the hotel. Of course that meant I needed to reserve a bicycle space for the train journeys but that isn't a problem is it?

"You’re advised to reserve a space for it before you travel – bike reservations are free and can be made at the same time you buy your train ticket.
On all our trains we have two reservable bike spaces. Bikes for which no reservation has been made will be accepted on a first come, first served basis and subject to space being available."

I booked my train ticket one month before travelling but was unable to reserve a bike space due to a 'technical error' on the website. I then rang the helpline to book one and was told all the spaces were booked for both legs of the journey. As I couldn't risk not being able to bring my bike back I reluctantly decided I would have to forgo the bicycle element of the trip.

And the result? Well despite giving it an hour on the Manchester Metrolink tram to travel 6 miles I only just made the station after being crushed in an emergency stop and on the return in Oxford I made it with only 2 mins left thanks to a taxi that was 20 mins late - a journey I could have done in half the time on a bicycle.

And what was really annoying was there was a completely empty bike rack on the carriage! Thanks a lot Cross Country Trains.

I already have a Blackburn rear pannier rack which has been adequate for my needs for the last few years carrying smallish, often half empty panniers. However, I have found my new Ortlieb panniers, when full, sometimes catch on my heel which is really annoying. I can't move the bags any further back and so had already decided to get a Tubus Logo rear rack with the new bike. It allows panniers to hang further and lower over the rear wheel, so lowering the centre of gravity and stabilizing the load. It also seems to be the one for most touring set-ups. As I have already got a new Brooks B17 saddle for transfer to the new bike (a report to follow in a few weeks or so) I decided to get a new rack and fit it to the Marin for now. What a difference!

The rack was easy to fit in about 10 mins, looks like it could hold a smallish mountain, is lightish (not much different to the Blackburn) and really changes the bag position. The result is no more heel catching and a significant improvement in the feel of the bike, particularly when pushing or going slowly. I did balk at the price (£83.00!!) but am really pleased with it now I have it. As a bonus it also has a plate to fit a rear light to which is very useful. I now have a second rear horizontal rear flasher to complement the vertical one on my seatpost and the difference in visibility to traffic is dramatically improved.

I always think you can't be too visible for some motorists and with lots of dark night and early morning commutes over the next few months it will make me feel just that bit safer. I have certainly noticed some traffic giving me slightly more room when overtaking, so that's not a bad thing.

One more step nearer to my dream bike.

It's going to be a Santos 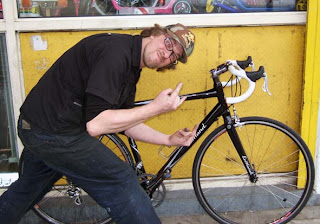 Well October is here and I have a new job. Still with the same employer but also with a promotion so happy to stay put for the next few years (if I hadn't have got the job I would have been looking at other prospects in the area). The only problem is I am still waiting for my employer to start the cycle to work scheme! I'm going to give it a few months and try to apply some pressure in the meantime but if it still not up and running by 2010 I'll just bite the bullet and buy without any assistance.

A downside of the new job (there aren't many if any colleagues are reading) is I have changed to a different location and have cut my 13 mile return commute with hills to a 6 mile, flattish route. A shorter commute and less hilly - what a bonus I can imagine some people thinking! Those of you that enjoy your cycling though will know 3 miles is barely a warm up and without a hill or two there is little aerobic challenge. Still, it's a small price to pay for the promotion and as the Golden Child has just started Nursery School five mornings a week the wife and I have some extra 'non child care time' that can be utilised as needed. Looks like I will be looking for some fun routes to do.

Pretty much decided on a Santos Travelmaster for the new bike. 700cc wheel size, aluminum frame in pearl white, a Rohloff hub gear system and Magura hydraulic rim brakes. There are only four dealers in the UK according to Santos website. The nearest to me, in Ilkley, only deals in Santos tandems and the remaining three are all down south; Brixton Cycles in south London, MSG Bikes on the south coast and Ben Hayward Cycles in Cambridge. Despite having the least slick website and not offering (demanding?) a computerised, pre order measurement service at the shop (so needing at least two visits), I have decided to go with Brixton Cycles. It is the easiest/cheapest to get to by train and I had a really good chat with one of the guys there. He sounded pretty switched on and has ridden a Travelmaster for a few months and so could advise from experience.

It's going to be an exciting Christmas!