Cycling and the City

I have just returned from a family holiday to New York and Florida to help celebrate my sister in laws 50th birthday. I knew I was going to miss my regular cycling fix while I was there but had noticed some guided cycle tours when I was in London last year and thought New York must do something similar. A quick Google search led me to Bike the Big Apple and so with the blessing of the wife I booked a tour. While I was busy she was going to take the Golden Child to an indoor play area called Bloomingdales or something similar so all were happy.
I found the bike shop where I was to meet, having left lots of time in case of difficulty and so arrived with an hour to spare. I was a little disconcerted when the guys at the counter didn't seem to know what I was on about and thought I just wanted to hire a bike. Suddenly something clicked and they explained the guy running the tour would call by later. It appeared he used the shop as a meeting point but they were a separate entity.
Marc duly turned up and bikes were distributed and adjusted. In addition to Marc and myself the tour group consisted of two couples – a father and son from Florida and a young Canadian couple. After introducing ourselves Marc gave a little briefing on the tour route and what we were likely to see along the way, some background about the increase in bicycle lanes in the city and how to ride in a group and so on. Then we were off.
Marc - our guide 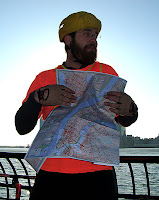 Essentially we headed across lower Manhattan from east to west, and south along 5th Av. and by the Hudson River before turning north at Battery Park with a return western lurch up the Brooklyn Bridge at dusk to return to our starting point 9 miles and 4 hrs. later. See the Google map for a better idea of the route.
View Bike the Big Apple Manhattan Tour in a larger map
While the pace was leisurely to say the least, there was so much to see accompanied by Marc's regular little narratives about various places, it was easy to maintain a high degree of interest. One of the highlights included having a look into the Ground Zero sight from the elevation of a nearby public building called the Winter Gardens.
Ground Zero

This video shows the Hudson River. We had just left the Winter Gardens and you can see the Sun is going to be setting soon.
This video shows the view from the Brooklyn Bridge. I was running low on video battery by then so saved it for the return leg of the bridge trip. The ride up the structure was the only part where I felt I was having to work a little bit! The picture shows the view from the tower nearest Manhattan. On the left is the walk/cycle way. I can heartily recommend the ride. Marc was an interesting and informative guide and although, being from the UK, I was the target of a few digs about American Independence, I really warmed to his easygoing and relaxed manner. If you are ever in New York and fancy a guided tourist trip with a difference then you should definitely book a place.
7 comments: