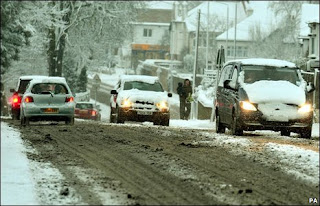 A cold snap across Europe has left Manchester with slushy/icy roads for the last few days. The first day the roads were as the picture above - I decided to take the car to work! It wasn't too bad driving but took longer than a normal cycle commute as everyone seemed to be driving with a modicum of sense at least.

Trying not to let the weather beat me I decided to cycle if at all possible. The next time I was due to commence work I was starting a set of night shifts and the main roads had been cleared to a degree (by ploughing everything into the cycle lanes). I gave it a go on the bike. I left earlier than normal and had extra clothing in case I needed to get off and walk. It only took 20 mins instead of a normal 15 min journey time. I went extra slow around corners and on the side roads but had no problems at all.

Due to leave for a night shift in half an hour and will be taking the bike again. The roads are maybe a little more slushy after fresh snowfall today but it hasn't frozen yet. Wish me luck!
No comments: 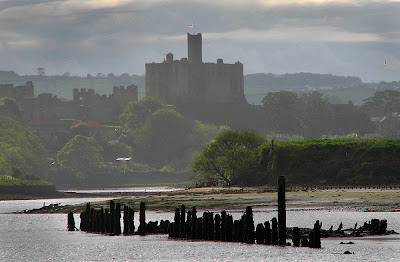 My planned ride to Peel Tower had to be cut short as I had other more pressing commitments landed on me that day (and the weather was horrible). I still managed a 10 mile ride but felt disappointed with myself if truth be told. So I was determined to have a long ride at the weekend.

We got to the in-laws on late Friday evening and I woke fresh and raring to go on Saturday. I already had a cycle route map and a GPS route planned on my SatMap, the bike was checked over and the weather was dry. I set off at about 10.30 hrs and suggested to family they could meet me in Amble around 12.30 hrs for fish and chips before I set off for the return leg.

Getting there I reckoned was going to be 22.5 miles of mainly road/cycle lane with a smaller proportion of traffic free Bridleway/old railway path. I arrived in Amble after 95 mins having covered 24 miles and only having stopped at junctions/lights or to open/close gates. The route was generally good although the cycle paths through Ashington are designed for the benefit of cars on the whole and I was a bit put out cycling the coast section (on tarmac) to suddenly find I had to cross a three gated muddy fields sans cows before being able to return to firmer ground.

Arriving at Amble I felt fine and looked forward to meeting the family. Unfortunately the family had other ideas and were still pottering around at home (I made better time than they expected they explained!!) so I had my repast while I waited for them to arrive. When they made an appearance after an hour we headed to the beach to let the Golden Child have a play in the sand then retired to the cafe while I had a cup of tea and they had lunch. At 14.30 hrs I left them and retraced my tyre marks into the now sinking sun. I wanted to complete the coastal, unlit section while there was still some natural light - most of the inland section being navigable by street lights.

The ride back was harder. There was a slight head wind along the coast, the inland section had a distinct overall ascent and I was cold (note to self: must get some waterproof cycling socks). Still, I got back in 110 mins. I had done 48 miles of cycling and apart from cold feet and a bit of a neck ache didn't feel too bad at all. Even the next day didn't present any stiffness and I could easily have done it all over again.

I know my charity ride is still seven months away but I feel really excited by the prospect of a week of cycle touring. I plan to get some longer training rides before it and will even try for a two or three day fully kitted up/camping out trip if time allows.
No comments:

Commuting Is Not Enough 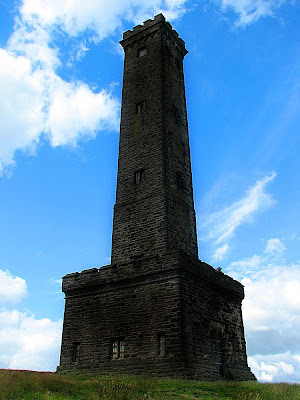 The beauty of cycle commuting to work is I have been fitting my 60 mins of aerobic exercise into a work day. I tend to do 3 long days or 4 nights per week so the "shift" is either 10 or 14 hrs long. When I'm not at work I am either looking after my little girl or out with my wife on the days she in not working. However, things have recently changed and it is easy to tell the difference with a distinct lack of energy and a slight drop in mood.

You see I have just started work at a site nearer to home (3.5 miles instead of 6.3) with less hills to get there as well. The upshot is an extra 30 mins in bed of a morning but the downside is after 5 trips of the new commute I don't really feel like I have done any exercise (hence the drop in energy/mood). I arrive at work fresh as a daisy but feeling ready to up the pace rather than stop. My nearest and dearest tells me to get out of bed earlier and do a longer route but I am not a morning person and the extra 30 mins is really nice so this is not a realistic option. I am happy to take a longer route home but after 14 hrs and the possibility of doing it all again the next day I doubt I will be doing this every shift.

I need to start doing some longer runs in prep for the Pennine Cycleway next year so I am going to start trying to fit in some road cycling when the Golden Child is in nursery of a morning. While she generally goes for just 2.5 hrs this is enough to get out and about for 20-25 miles or so. I am starting tomorrow and will be heading via Bury up to Peel Tower at Holcombe Hill and back.

So I hope to feel energised at the end of it rather than just knackered. If it goes alright I will be doing a 44 mile return route from Morpeth to Amble along the Coast and Castles route at the weekend (visiting family up north).

The way shifts for Christmas are going plus December family commitments this is the most extra I am likely to get this year. I do have an invite for a local ride with Coco who lives nearby so will have to really put aside some time in the New Year.