I have been cycling to work for almost two years and credit this fact with a 17 kg weight loss and commensurate increase in fitness. I cycle through snow, rain and in the dark. I am a pretty committed cycle commuter. I wish my employer would make it easy though.
Despite being a large NHS acute hospitals Trust they still haven't managed to set up a cycle to work scheme. This doesn't bother me greatly but does indicate the importance the top honchos place on encouraging a healthy lifestyle - something I thought we were supposed to be doing! It might happen in 2011 but I'm not placing any bets.
The cycle storage is also dire. A few outdoor racks of various types dotted around the site. None of them are in a secure building and all are exposed to the elements. Some bikes that have been left outside have been vandalised and others stolen.

I rarely leave my bike locked outside. When I do it is secured with a heavy duty Abus City Granite chain through the frame and front wheel which is secured to an immovable metal object, the rear wheel locked into the frame with an Axa Defender wheel lock and the seat post/saddle removed. I would never leave it in the same place 3-4 days a week, 14 hrs of the day from early morning until well into the evening. Never mind the area of Manchester I work in which is populated by some very unsavoury characters. 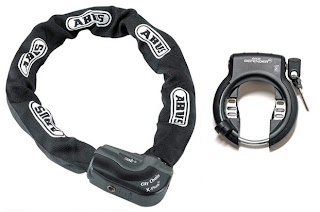 So, for the past eleven months, with the tacit approval of my bosses, I have been leaving my bike in the male changing room, up against a wall and out of every ones way. Not been a problem except this week a note went up to say no bikes were to be brought in doors and they should be locked outside. I was not a happy bunny. It transpires a couple of other people have been cycling in and one of them had been wheeling a wet muddy bike through the main clinical area - hence the blanket ban.
I arranged a hasty chat with the boss involved and we have agreed the status quo can be maintained while alternative secure cycle storage is looked into. One of the other bosses is keen for this to happen as well (he is an infrequent cycle commuter) and we have already identified a courtyard that can be accessed from outside, which could be easily gated and would have space for ten or so cycle stands.
All this coincides with the setting up of a Bicycle User Group (BUG) for the Trust so guess what I'm going to be joining this week? I just hope the honchos whose permission we will need for this to go ahead are amenable to our arguments. A nearby Trust has excellent cycle storage provision, would force a slightly longer commute (a good thing as my current 3.5 miles finishes just as I am getting warmed upped) and a job there would not harm my CV at all. I really like my current job though so I hope we can work it out.
No comments:

I love my Ortlieb Front and Back Roller panniers and would not use any others by choice. I like my Ortlieb bar bag (an Ultimate 4 Classic) but feel it is let down by the bracket which, while OK when first fitted, is spoiled by the method used to secure it to the bar. It fastens by tightening a single bolt into a female thread on the end of wire which is looped around the bar and stem - the whole held in place within a plastic frame. Not too bad when first used but if removed for any reason it is very easy to find it jammed or to even strip the plastic housing with obvious difficulty reusing it. The wire itself also wears where anchored and will only stand so many attempts. Also, in use (with a moderate weight in the bag consisting of sunglasses, wallet, GPS and compact camera) the whole assembly can sometimes slip around the bar, particularly over rougher ground. The bag itself is great though and I have no wish to replace it.
So knowing I needed a new bracket at some point, I came across the Rixen Kaul KLICKfix system which has great reviews and fits many types of bag and accessory. Online information was mixed on whether it would accept the Ortleib bag mount though. So today I headed into Evans Cycles in Manchester with the bag and tried it on a KLICKfix bracket. Despite the two parallel mounts being narrower than the Ortlieb design they do provide a secure fit for the bag and the bar fixing design looks significantly more substantial. I bought  one and have also ordered the extender (for curved/butterfly bars) and a multi accessory clip for fitting extra lights to for wintertime commuting. I'll post some pictures when it is all set up.
No comments:

While I am still to complete the Pennine Cycleway page, I have been busy reminding various persons and collecting monies I was sponsored for the trip. The whole sponsor thing was hard work but worthwhile. Lots of people have been very generous but it has taken longer collecting it than planning the trip and seemed harder at times than actually completing the route! Still, I will be sending off my cheque tomorrow and along with the online component and adding Gift Aid where appropriate I am chuffed to have beaten my target and raised £2150.17 for The Marfan Trust.
No comments: 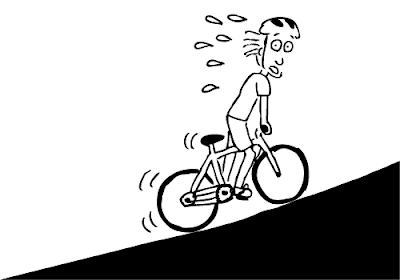 My wife never got the hang of cycling as a child and so has never pursued it as an adult despite my enthusiasm.
A recent trip to see the in-laws saw me encouraging a family cycling trip along the prom at Whitley Bay one fine sunny day. I dusted off her old bike and the two of us + Golden Child had a somewhat mixed cycling experience. My wife did better than she expected but the daughter - who is so close to losing the stabilizers - was obviously not keen and started complaining of "tired legs" within 30 seconds. The upshot is the wife and I went for a ride around Heaton Park this morning at her suggestion!
We covered less than 2 miles, she almost fell off once after misjudging her approach across some tram lines but apart from that I think she had a good time. She managed to cycle back up the hill from the boating lake and even having to slow for excitable dogs didn't dent her confidence or resolve.
She is never going to be a road going cyclist (unless they are very quiet) but I think we can look forward to some more family days out on our bikes. Just need to work on the Golden Child now.
1 comment: