Off on my extended hols. The house sitters are here and the bags are packed. Will be back at the end of April. Au Revoir and happy pedalling! 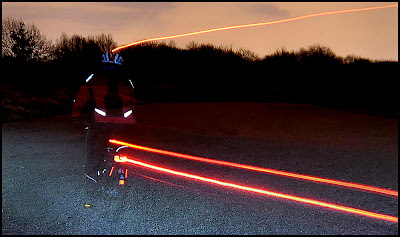 Even when the roads are not choked with traffic, the cycling infrastructure doesn't make it easy. That and drivers with absolutely no regard for other road users.

The video shows it all really.

Following on from my recent post where I suggested segregating cyclists fully from traffic on some roads is one way to really increase cycling numbers, I thought I would demonstrate the reality of vehicular cycling in one area of Manchester during rush hour.

This is part of my commute to work. Usually I travel in around 07.00hrs and the roads are much quieter but sometimes I work office hours as on this day. There is no way to avoid this traffic. Taking side roads for part of the route still feeds me into choked roads at some other point. There are no separate cycle lanes, canal paths, old rail lines or quite lanes. The bus/taxi/cycle lane is useful but is short lived and still gets prohibited traffic using it.

I am sure most experienced commuter cyclists will consider this the norm and wonder what the issue is. I don't consider it an attractive cycling environment although, if I'm honest, I do enjoy the challenge it presents. I think most non cyclists will look at it in horror though. I can totally understand why this kind of cycling environment is not likely to entice people to cycle.

Got the new rear light today. I had glued the lens of the old light back together but it was only going to be a temporary repair until the new one arrived. I'll miss the old one but the new light is a fine replacement. 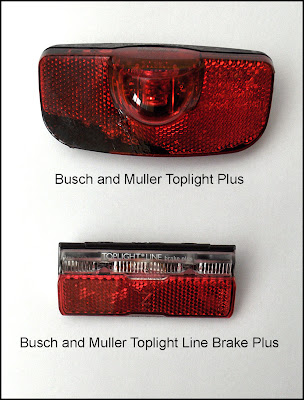 As you can see, despite both units coming from the Busch and Muller stable and including the word Toplight in their names, they look very different. The new light is smaller and much slimmer. In addition to appearance these are the main  changes:
Like the old one though it has a condenser and so will remain lit for several minutes even after a short ride (really good at traffic lights and junctions).

It was a doddle to fit. I unbolted the old light, removed the wires from the terminals and trimmed them. They attach to the new light either via spade connectors or snap fittings. I chose the latter, pushed the wires in and snapped the latch across, bolted the light to the carrier and spun the front wheel. Hey presto it worked! Took about 5 mins all told.

One thing I will not miss about the old light is the faff when fitting a pannier(s) to the rack it caused. Because it is so wide, it overhung the side of the rack and meant I had to manoeuvre the pannier fitting around it. Not hard when you got used to it but still a faff. The new light does not overhang and so faff is eliminated.

The one thing about rear lights is you usually only see other peoples in action. I intend to see how good this one is in proper commuter mode so I'll be getting my brother to ride around a bit a let me film him. Expect some footage in the future!
1 comment:

I cycle (you know this already). I cycle on roads, off roads and on cycle lanes and paths. I tour, commute and shop on one bike, play on my road bike and MTB. I cover about 3000 miles a year. So I think I have a fair bit of experience of cycling provision in the UK. Most cycle paths/lanes are of poor design and quality - painted lip service to cycle provision - and a lot of UK urban roads designed with the motorist in mind and no thought for cyclists at all. You have to be confident, quick and thick skinned to use some of these roads. I am  a cycle convert though. I am happy to use my bikes in traffic (despite my recent left hook). I will cycle whatever and make the best of it. It doesn't mean I like it all the time.

Most non or occasional cyclists I talk to will not countenance cycling on the majority of UK main roads and cycling infrastructure. They find the idea mad, dangerous and suicidal. I understand why they feel this way. I will not let my young daughter cycle on UK roads, with my supervision, so why should I expect others to let their children? Why would a slow, under-confident 'leisure' cyclist choose to cycle a mile or so to the shops along a busy road when they can drive? How can these potential cyclists be encouraged to get on their bikes?

The Dutch, whatever your thoughts on how they do it, do promote cycling across a broad demographic. Up to the 70s however the car reigned supreme there as well. Some UK cyclists rubbish the Dutch style model for use in the UK despite their success. One of the main elements they seem to oppose is the segregation of cyclists and other traffic - completely separate lanes for cyclists rather than painted lanes on existing roads  common in much of the UK. They argue there isn't space and it will cost too much to provide. However, I fear what some cyclists are really concerned about is the loss of the right to use the road because of the provision of segregated cycling lanes and paths. I can totally understand this fear. I would much rather use the road than what passes for cycle paths/lanes on the whole. But there are some UK roads I am legally entitled to cycle on now I will not use anymore. I am just not that quick or confident to cycle on 50-60 mph dual carriageways for instance! In essence these roads are already banned to me. Just what is wrong with having quality cycle paths running alongside this type of road I wonder?

The suggestion segregation would not work in the UK in total nonsense IMHO. Promoting segregated cycle infrastructure in the UK as not about digging up and rebuilding all routes or barring cyclists from the roads. It is about applying selective segregation where it can work and would make a difference. In other places different measures would be needed to make cycling safer. Measures like: traffic calming, reducing speed limits, shared space schemes, increased permeability for cyclists, reducing HGV use at certain times/locations and so on and so on.

Increasing the number of cyclists and making it easier to cycle rather than use a car are things that can go a long way to aiding the environment and improving health. Segregation is just one tool in the box to increase cycling numbers. It should not be made out to be unsuitable for the UK because of the vested interests of a few fit and confident cyclists who fear they will lose out. Cycling should be for all who want it and the infrastructure should encourage this not and not limit it.
12 comments:

Did the school run today and then a quick cycle to work in the rush hour traffic at about 09.15hrs. On the way I came a cropper when a motorist did a left hook on me just as I was filtering up the inside. Daylight, bright red top, Schmidt Edelux beaming away and CatEye Single Shot on strobe at mirror height still wasn't enough to notice me...because the driver never looked in the wing mirror!

I had been passing standing/crawling traffic on the outside. I'd moved to the inside a few car lengths before because the cars had thinned out a tad, a pedestrian island loomed ahead blocking my way and a bus/taxi/cycle lane started just after the next side road. I passed a couple of cars at the rear of the next queue and was just about to pass the side road when the motorist level with it decided to indicate and turn left all at the same time.

I had slowed from 20 mph to about 12 mph while filtering this section and was level with the boot of the vehicle as this happened and slammed both brakes on (which I was already covering). I had no where to go except forward. I'd hit the brakes so hard though I stopped the bike and went over the bars doing a roll onto the ground just by the rear of the car which was now sideways on. I think the bike did a 180 degree flip and landed on the rear rack busting the Busch and Muller Toplight Plus lens before it fell (gently) onto me!

I never made contact with the car but the driver realised what happened and pulled over in the side road. Several drivers got out from the standing traffic and a cyclist I knew stopped. There was much fussing telling me to keep still but I knew my main injury was a slight knock to my back where the bike had made contact and so I waved off any concern. I despise people who abuse the system and seek compensation for supposed injuries. The driver admitted fault straight away, gave profuse apologies and offered to pay for any damage to the bike so I decided to let it go at that, although not before pointing out they should check side mirrors and flipping an indicator does not provide some automatic right to turn.

We swapped numbers and I'll be in touch with the driver with the replacement cost for the light. I think I'll be upgrading to a Busch and Muller Toplight Brake Plus which acts as a combined rear light and brake light. At least something good came out of it anyway!