I've been back from my shopping trip to Amsterdam almost three weeks now and in that time have been able to cover  a few miles on the bike. So these are my considered first thoughts. It's gorgeous! 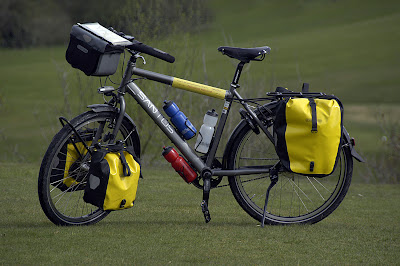 I thought I had got the old commuter bike well set up, what with road tyres, Brooks saddle and Ergon grips but the Travel Master is just a revelation. Don't get me wrong. I wasn't contorted by the old bike but after 20 miles or so the lower back started to ache, the hands craved a new position and I just had to get off and stretch.
I've not had this with the new bike and feel 30-40 miles could be done before any significant rest was needed - it is just so comfortable. It also rock steady carrying the front and rear pannier and the power is easily translated to the road - it just seems to eat the miles! The butterfly handlebars were a shot in the dark but I knew I wanted more hand positions than a flat bar offered but don't like drops for touring so I went for it - no regrets at all. They look a bit different and have been the subject of a couple of comments but they work and that is what I wanted. 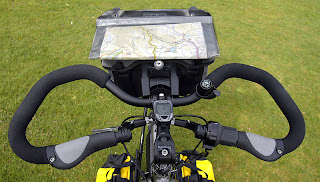 The other shot in the dark was the Rohloff Speedhub internal gears. This was the most expensive non standard option and was a significant portion of the bike cost. I decided on them mainly as they are: very robust and very much maintenance free (compared to a derailleur set up). I was also influenced by the number of long distance touring cyclists who use them, such as Mark Beaumont, James Bowthorpe, Ivana Coria and Harry Kikstra, and Cass Gilbert to name a few as well as Eric's recommendation at the shop. So far they are working well, I like being able to change gear while stationery, the range is more than adequate for touring and I don't find them too noisy (some people comment they can be noisy particularly when new). I am so used to thumbs shifters though I keep forgetting which way to turn the handle! Certainly not a required option but I like them and am sure they will last well. 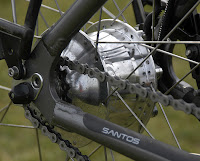 I am planning to ride a mixed surface, variable terrain, 40+ mile route this weekend with full panniers so I'll know more then but I don't really anticipate any problems - just need to decide on my route now! 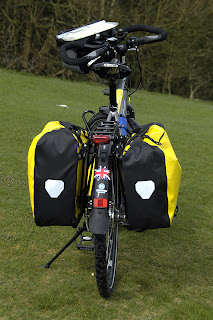